The first classes were the trail classes where in this event, the rider has to maneuver the horse through an obstacle course in a arena. Horses must cross bridges, logs and other obstacles;  side-pass (to move sideways) along a pole; make 90 and 180 degree turns on the back legs in a square made of poles, the rider then has to open and close a gate while mounted, and other maneuvers relevant (distantly) to everyday ranch or trail riding. While speed isn’t judged, horses have a limited amount of time to complete each obstacle and can be penalized for refusing an obstacle or exceeding the allotted time. This took place for most of the morning before moving on to reining.

Reining, considered by some the “dressage” of the western riding world, reining requires horse and rider to perform a precise pattern consisting of circles at a lope (canter) and gallop with flying changes of lead,(a flying change is a lead change performed by a horse in which the lead changes at the canter while in the air between two strides). Rapid “spins” (a turn in one spot on the haunches – back feet), “rollbacks” (a rapid turn immediately followed by a gallop in the opposite direction) and the crowd-pleasing sliding stop (executed from a full gallop). It is most interesting to watch, my mum and I watched many competitors do it and we still, at the end, had no idea of the course! 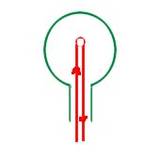 In the afternoon, the competitors gathered in the arena to play a few games: Keyhole, Break and Out and Barrel Racing. Here is a You Tube clip of some one doing keyhole. Keyhole is where the horse canters in to the entrance of a Keyhole shape marked out on the ground, traditionally with flour, spins around inside it and races back towards the finish aiming to get a fast time. Usually the times range from about 8-15 seconds.

Break and Out is a bit like Simon Says. The competitors are given an instruction by someone and the riders have to follow and do what was asked as fast as they can. The last person to do so is out. This continues until there are only two competitors left and there is one clear winner. There are prizes for 1st, 2nd and 3rd – sometimes a 4th.

And I’m sure most of you will know what barrel racing is! If not, here’s an explanation: Barrel racing is a rodeo event in which a horse and rider attempt to complete a clover-leaf pattern around preset barrels in the fastest time.It combines the horse’s athletic ability and the horsemanship skills of a rider in order to safely and successfully maneuver a horse through a clover leaf pattern around three barrels (typically three fifty-five gallon metal or plastic drums) placed in a triangle in the center of an arena.

This is my favorite of the games and races. I’m quite often on You Tube watching people do this race and I never get sick of watching it. Once I have learnt to ride my horse properly, I will definitely be practicing how to do it so I can race against my friend if hes willing because he does western riding too! hehe